I suppose this story began sometime about July 1968. It was at our dinner table. It was mandatory that my brother, sister and I were always present for the evening family meal. My mother insisted that we all came together for at least one meal a day. On this particular evening my father and mother had an announcement to make. I was eight years old. I knew even at the young age of eight that something big was about to be presented to the family.

Shortly after dinner my mother began by saying she had something important to tell us. Personally, I could not imagine what she had to say to us.Out of the blue, bang, my mother says I’m going to have another baby. My brother, sister and I were elated. As I now recall, I remember my father and mother did not seem to be nearly as elated as me, my brother and sister. Now, looking back, it seems all too clear to me. My mother was going to have a fourth child at the age of 39. She already had three children under the age of eleven and needless to say she had her hands quite full. My father worked six days a week simply trying to handle a family of five, let alone number six on the way. Again, looking back, I never sensed one ounce of apprehension or concern. My parents were very good at keeping those sort of family concerns from the children. They were great parents at that time. It wasn’t until later that they too began deteriorating, which I will address later in this story. 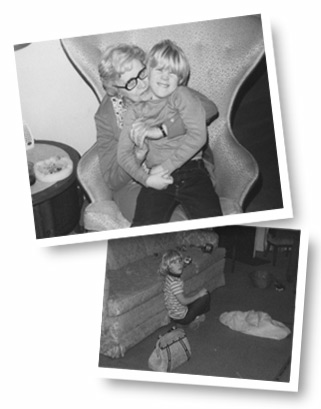 Our family truly led a picturesque life until around 1986. Things really began to change in many ways. I went off to flight school, my brother bought a house while taking on a job and my sister got married somewhere around that time. That left my younger brother Matthew alone with my parents. By this time my parents had reached their late fifties and early sixties. Unfortunately my poor mother suffered from cataracts in her eyes and received several painful and mostly unsuccessful operations which made her legally blind. This combined with my younger brother Matthew who began to display very odd, delusional thoughts, actions and attitudes.

It began to put unbearable, incomprehensible thoughts within my mother. My mother had dealt with schizophrenia with her sister for many years and I believe she had a true sense of what was to come. That is exactly what this story is all about: trust those gut intuitions you have when it deals with this diabolical disease. I suppose the disease began to manifest itself in my brother’s brain about the time he graduated from high school. He was always a slow learner and sort of inhibited throughout all of his life. But after high school, about eighteen years of age, you could see and tell that he was not right. Matthew was almost spooky in action and attitude and he became scary to my dear mother. She weighed maybe one hundred pounds while Matt weighed about two hundred twenty. As time moved on he became reclusive; did nothing socially except hang out with derelict friends who drank to excess, did various types of drugs which simply enhanced the effect of his illness.

This went on for a couple of years when finally my sister and I decided, against my parents’ wishes, to get involved because we could see how drastically things were deteriorating with Matt and my mother and father. It was then all hell began to break loose. Matt’s paranoia really started to incredibly manifest within his brain. He began believing my parents were controlling his thoughts and actions. He thought they made him impotent, kept him from being normal and were out to ruin not only his life, but that my parents were going to start World War III. For the first time in thirty years, we had deadbolt locks installed at the house. We never felt the need for them before. My sister, dad and I all bought cellphones and beepers so my mother could call and get in touch with any of us at a moment’s notice because she truly feared for her safety.

During this time my father had taken Matt to numerous doctors/psychiatrists where he was diagnosed with paranoid schizophrenia and prescribed various medications. When he took them he got better. Unfortunately he often refused to take the medication or would pretend to take it, then spit it out. Matt didn’t think he was sick and when he stopped taking medication he acted strangely: He would stay up all night long, sleep mostly all day and when awake he would listen to acid rock music or literally play the drums for ten to twelve hours in a row. He displayed absolutely no respect toward my parents, my sister, me or anyone who didn’t conform to his delusional thought processes.

The acts of violence by Matt are almost too numerous to list: smashing our parents’ glassed-in rear porch and family room; throwing bricks through my parents’ car windshields; wrecking three automobiles and stealing my father’s company car for several weeks to chase hurricanes in Texas and Louisiana. He was absolutely crazy.

Finally, my parents kicked Matt out of the house at the suggestion of Matt’s doctor, who warned he could eventually kill our parents. Well, let me tell you, they very much believed and followed the doctor’s advice. The doctor even ordered a duty to warn directive at the hospital where he was treated during his entire illness. That directive meant that anytime Matt was released from the hospital, my parents were to be notified so they could take protective measures to ensure their safety.

On his own accord, Matt checked himself into the hospital on September 17, 1994, knowing how ill he was and having nowhere else to go. His doctor said to admit him. Matt appeared unkempt, dirty and paranoid and somewhat beligerant. The next day he woke up screaming and crying “why are they doing this to me?” He was referring to my parents. Most people with paranoid schizophrenia are not violent, but when they do become violent they frequently strike out at those they love the most. I don’t know why.

On September 18, around 3-to-4 p.m. Matt requested to leave the hospital. Since he was their voluntarily, it was up to his doctor to decide on his release. A phone call was made to his doctor and, over the phone, without visiting Matt, the doctor okayed his release. Eighty percent of a psychiatric evaluation is based on visual observation of the patient. Our doctor never saw Matt and only took the word of weekend nurses who I’m sure thought Matt was a pain in the ass. Anyway, they discharged him with nowhere to go. Hospital records show that the staff saw Matt wandering aimlessly on the hospital lot and acting delusional. He somehow realized he was too sick to leave the hospital and he went back to admittance to remain in the hospital. Instead of calling his doctor, as is protocol, security was called and Matt was thrown off the hospital grounds. Thirteen hours later he went to my parents’ home and brutally stabbed them to death. Three months later Matt’s doctor committed suicide.

EARLY RECOGNITION OF MENTAL ILLNESS If someone you know changes and starts acting very different, don’t wait for the unusual behavior to go away. It won’t. It can do nothing but get worse. Remember, the longer you wait, the more difficult it becomes to treat the disease.

FOLLOW – THROUGH This is the most difficult disease to treat for several reasons: social stigma; unwillingness for standard hospital treatment due to insurance denial. Do not take no for an answer pertaining to admittance, treatment, discharge and most importantly, upon initial evaluation. Demand a 96-hour true psychiatric evaluation. So often the person with mental illness is just sent home. Seek help from supporting groups like the National Alliance For The Mentally Ill (NAMI).

THREATS AND FEARS There is never an idle threat when the threat comes from someone who is severely mentally ill. Protect yourself, because my family made the mistake of trusting the mental health system which completely failed us. Act while you can.

ADVOCATE Never stop fighting the system. Many mental health workers haven’t experienced our life or fully understand what it’s like to have a family member with serious mental illness. Fight like hell with your representatives, senators and advocacy groups. This is America’s number one social disease. Believe it.

SENATE BILL 884–THE MCBRIDE BILL In Missouri, Senate Bill 884, sometimes referred to as the McBride Bill, was signed into law in 1996 by the late Governor Mel Carnahan. Part of that bill allowed the historical pattern of behavior to be considered by judges when determining if a person with mental illness should be forced into involuntary treatment. The law makes it easier to involuntarily commit people to mental institutions by removing the requirement that judges determine first that the person poses a physical danger to themselves or to others before ordering an evaluation. Patterns of behavior, such as failure to take medication, could be taken into account by a judge, who also would have the option of ordering six months of outpatient treatment for patients who need monitoring. Previously, a judge could order a person to undergo a 96-hour mental health evaluation. After that, a judge could either commit the person to 21 days of treatment or release them.
The new law also allowed doctors to disclose private information to parents, family members, or caregivers, such as diagnosis, medication, physical needs and any other necessary information which previously had been confidential.

Missouri Statute 632/Senate Bill 884 determined that physical harm was grossly misinterpreted. Physical harm to a severely mentally ill person begins the moment that individual stops taking his medication. Many of the problems related to mental illness would be eliminated if the person who is sick would take their medication.